Grown widely in North America, both across Canada and the United States. It is also called Rock Maple (as in hard), which is an indication that this timber is used for robust flooring. The trees grow to  about 100 ft ( 30 m).

In the UK it was widely used in commercial premises from the 1930s to 1950s. It is often reclaimed from places such as school gyms, post offices and large warehouses. The wood-block can sometimes be found in 12″ lengths. This species is generally milled in quite a thick block as it was used for heavy wear.

The colour is consistent, light or pale blonde, a very appealing, warm looking wood. It has a typically straight grain. It can sometimes be wavy or curly, or have Bird’s Eye figuring (a curly graining caused by an insect attacking the growing timber). The wood is resistant to abrasion but polishes well to a lovely lustre.

This species is quite a heavy, hard and resistant to shock. It is comparable to Beech in strength, however it is not suitable for external applications. Also used for furniture making, and veneers with the more figured timbers. With its strength and resistance to wear is often used for attractive but heavy wearing parquet flooring.

This species is an extremely popular choice amongst customers due to the light colour tones and hard-wearing nature.

You can order a sample.

When in stock, you can buy Maple here. 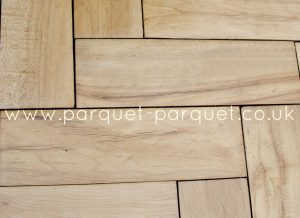