Opepe is a tropical hardwood from Central and Western Africa. It originates from the following list of countries: Angola, Cameroon, Congo, Equatorial Guinea, Gabon, Ghana, Guinea, Ivory Coast, Liberia, Nigeria, Sierra Leone, Uganda and Zaire. Opepe is a commercial timber, grown in West Africa. It has the following uses: carving various objects including dug-out canoes, as well as heavy construction and flooring. Another name for Opepe is African peach. That rather nice name better reflects its eventual colour.

The species is listed as vulnerable on the IUCN (International Union for Conservation of Nature) Red list – ‘Rare’ in Ghana and Uganda and ‘Vulnerable’ in Cameroon.

The heartwood colour is warm golden orange brown with a pale yellow sapwood. The wood has a slightly stripey and sometimes rope figuring which is very attractive. There is also a flecked grain which gives interest to what is generally a consistent colour. When freshly sanded it is quite a bright orange, but the colour tones down relatively quickly to a softer peach or apricot hue. Opepe was often used as wood-block flooring in the 1960s and 1970s, more particularly in schools and colleges due to its hard-wearing nature.

This species has exceptional strength and good working qualities. It has hard wearing properties, and takes glue and polish well. The recognised stability in service makes is very suitable for parquet flooring and the price is very competitive.

This is an under-rated species, often overlooked in the British market despite its qualities. This is largely due to the warm orange-brown tones, which people find a challenge with current design styles. However these tones can look stunning in the right environment, warm and cosy. And we love it.

You can buy this species here or request a sample. 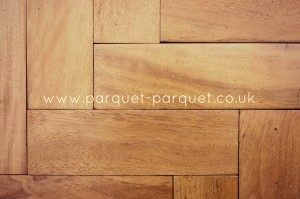